There are many academic researches connecting defoliation level in Soybeans to yield loss. It is also an important agronomic threshold to take pests control actions and decisions.

During manual scouting of the field, assessment of the defoliation severity is done by sampling a handful of locations; in each location, a random plant is selected and random leaves are sampled from it’s different parts (usually top canopy, mid plant and bottom leaves). Once gathered, the scouter estimates the damage level in each of the leaves and records the findings.
Are these sampling points enough to capture a field level phenomena? How accurate and unbiased can the severity measure be if it is done in 5% steps based on a single plant?

Since most defoliations in Soybeans begin in the upper canopy, it makes a great use case for Taranis’s SmartScout™. In our solution, which uses high resolution images taken from drones and airplanes, we can detect the defoliation damage to the Soybean leaves and assess their impact in a scientific and objective way.

With Taranis’s SmartScout™ solution we are able to detect and assess damage in early stages where the damage size is just a few millimeters. 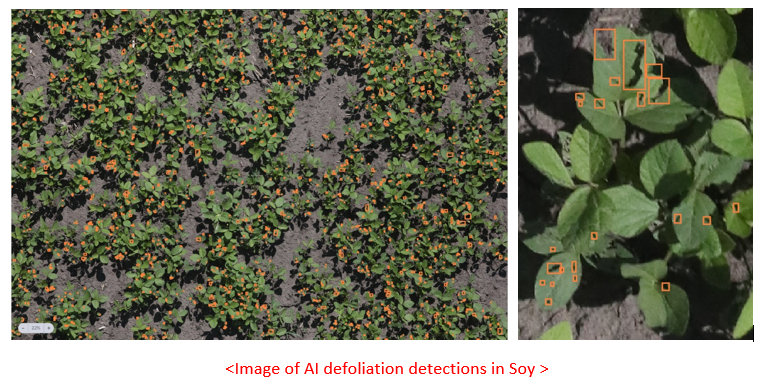 Note: SmartScout™ image are taken in a resolution of 0.2-0.3 mm/pixel and so enable the detection of defoliation damage as small as 1 mm in diameter. For the field level average defoliation severity, we exclude extreme values based on common statistical outlier detection methods. This gives a more robust estimation of the field’s average.
Another advantage of our high sampling rate is the ability to present the variance of the defoliation severity across the field, which can help in identifying the sources of the infestation and it’s dynamic in the field. 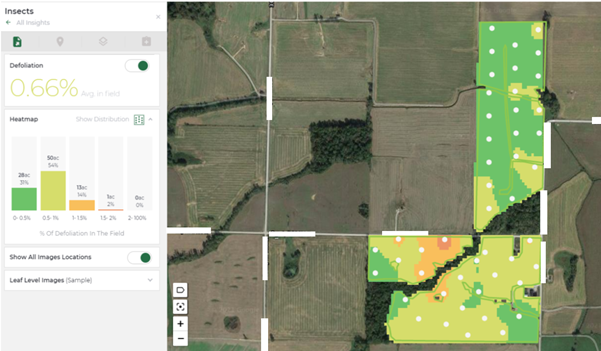 To make sure the defoliation severity calculated from the SmartScout™ images is objective and takes into account all the information gathered from the large amount of sample images, we developed an adaptation of the traditional severity estimation. In the following section we will explain this adaptation and give some intuition as to why it is even better than the traditional method.

In traditional methods the defoliation severity is given by assessing the portion of the leaf that was defoliated (as illustrated below).

In a similar manner – let’s examine the case of a single leaf [A]. In the following illustration we can see calculation steps which are similar to the way we calculate the defoliation severity. First we detect all the defoliated parts of the leaf [B], then we identify the canopy area [C] and approximate the “original” leaf area using Image Processing techniques [D]. Given those two layers of information we can assess the defoliated area [E] and all that is left is to calculate the defoliation severity as shown below.

Once we established a methodology to measure the defoliation severity on a single leaf, what might be the proper way to apply it to the whole image (with ground footprint of about 10-20 sqFt)?

One simple way will be to just apply the same principle for all the leaves in the image and average them. Well, since there is a variance in the leaf sizes – due to stage, occlusions and view angles, it might be better to base the overall severity on the weighted average (weighted according to the leaves’ full canopy area). It turns out that this solution is equivalent to simply using the same technique described above, only that it is applied over the whole canopy as a single surface.

As opposed to the manual scouting – Taranis’s SmartScout™ based solution to defoliation severity estimation can be carried out on many locations in the field which yields a dense map of severity (as discussed above). It is also based on a real random selection of the locations and an unbiased, objective estimation of the severity of the damage. Also, since our measure is based mostly on the damage assessment of the top canopy in a very high precision, it allows early detection of the source issues in the field.