The Critical Period of Weed Competition with Taranis SmartScout

The Critical Period of Weed Competition

Understanding the interactions between crops and weeds can aid the design and implementation of management programs with minimal risk of yield loss. A complicating factor in managing weeds used to be our inability to accurately predict their yield impact early in the growing season. Now, with Taranis’ AI in SmartScout, we are able to accurately identify weeds by species across acres and quickly make spraying decisions. The primary mechanism resulting in yield losses when weeds and crops coexist is competition for limited resources such as light, water, and nutrients. Plants are smart living organisms; they can sense the presence of a neighboring plant and alter their growing pattern, regardless of weed or fellow crop, even in a time of limited resources.

Weeds that compete with the crop for the entire growing season have the greatest effect on crop yield. More typically, weeds are present either early in the growing season and then eliminated, or they emerge later in the season after management practices have been implemented. With our SmartScout technology, Taranis is able to pin-point thresholds over three or 5 flight patterns and evolving field health trends through the entire season. Over time, weed species have become resistant to common herbicides used in the market and now is quite dramatic with the introduction of glyphosate resistant crops.

The longer weed control is delayed, the taller weeds become, the more bushels are lost to competition. This risk can be minimized either by implementing control tactics very early in the growing season, or by minimizing weed populations that establish with the crop with the use of preemergence herbicides. Risks of early-season yield losses in a total postemergence program can be reduced by making the initial postemergence application very early in the season. 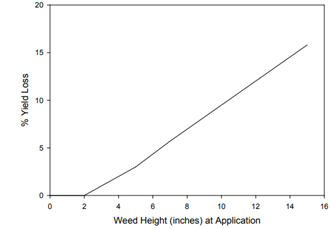 A significant percentage of fields in the United States suffer reduced yields due to weed competition. Unfortunately, much of the yield loss is usually due to the implementation of flawed management strategies, rather than failed herbicide performance or uncontrollable ‘acts of nature’. Our complacent attitude towards weeds may result in this behavior and that’s where the Taranis Team is making a difference transforming precision scouting in production agriculture. Powered by artificial intelligence and machine learning, our precision scouting platform delivers unmatched high-resolution imagery and in-depth crop analysis. Taranis’ proprietary software utilizes satellite, drones and AI to analyze and deliver real time insights at leaf level twenty times faster than a manual alternative. This platform allows crop advisors to better manage time and resources while making recommendations with higher focus and confidence. The end goal is to facilitate a deeper relationship between grower and consultant to empower timely decision making to maximize yields across the board.

This spring, we are taking our technology to a new level with the launch of CONNECT, our user-friendly mobile app. Real-time insights from the field will be directly available at the user’s fingertips, allowing advisors and growers to make quick and informed decisions together. Uneven emergence, nutrient deficiencies, weeds by species, in-season diseases, insects and defoliation are a few of the powerful threats captured by our system.